A recent post from Liberty Street Economics, the blog from the Federal Reserve Bank of New York, gave the public finance perspective on student loan debt.

As you all may be aware, the current administration is looking at ways to help college students receive a greater proportion of tuition assistance.

The Fed’s Director of Research, James McAndrews, in remarks to the National Association of College and University Business Officers, cited higher tuition costs coupled with more people attending college as the primary reason for the big jump in the nation’s student loan debt.

Which, by the way, is jaw-droppingly staggering:

That’s a lot of debt. And we know it’s keeping grads from buying homes.

But there is more to it, when looking deeper at the numbers. And, by doing so, we can learn how this debt is shackling generations out of the housing market.

Warning: There is no near-term upside to this conclusion.

No, it’s much worse. In truth, more and more college grads can’t even pay down their student debt in the first place!

Read this passage, the bolding is mine:

So what is causing the withdrawal from home and car purchase markets? It is likely that rising student debt and an uncertain economic outlook have depressed demand. But most likely, declines in credit supply play an important role as well. Our analysis shows that average credit scores have fallen for student debt holders relative to those with no student debt. Clearly for the substantial and growing group of student loan borrows who are delinquent or have defaulted on their debt, access to credit is reduced through potentially long-lasting negative effects on credit scores. Better data is required to evaluate the extent to which the decline in car and home loan originations is concentrated among those delinquent on their student loans and those who dropped out of college, or whether it is more widespread among all those with student loans. 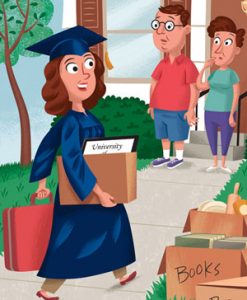 But more worrying is that the more delinquent, the more likely one is to still live with their parents. And let’s be honest, an extended period of living at home leads to behavioral changes over time. The longer they stay, the less likely they feel an immediacy to leave.

As Raphael Bostic said, at some point, they’ll eventually pair up and move on.

But in the meantime, questions remain as to when any meaningful change to the tuition-financing mechanisms may actually take place.

McAndrews makes the case that none of this should ultimately prevent someone from getting a college degree. Lifetime earnings, he says, will eventually even it out.

Having employed and managed more than a few college grads in my time at HousingWire, I strongly disagree. I’ve seen firsthand how little a job can help dissolve one’s psyche when crippled by massive student loan debt.  It’s common and it’s a curse.

The Fed is looking for solutions, but so far has more questions than answers, and though it clearly wants to reform the system, it doesn’t yet know how.

“We at the New York Fed will continue to search for new facts to put on the table and push the debate forward,” said McAndrews, and I believe him.

Especially after learning how awful it can be for these college grads with little financial freedoms. They are those robbed of both their choice and their liberty to create a community.

It’s one thing to sacrifice short-terms hopes and dreams at the expense of higher education.

It’s another, more real and more tragic, phenomenon to lash financial neophytes with mountains of debt that cannot even be discharged in bankruptcy.

For these graduates, there is literally no way out anytime soon. And though that’s the real reason they aren’t buying homes, it’s also not the real reason we need to be worried.

A PERSONAL Budget is Critical to Your BUSINESS Success

When the Grass is Greener….