10 Keys to Investing Success in the New Year, Part 1

The Waterford crystal ball has reached the bottom of its descent in Times Square, the final chorus of “Auld Lang Syne” has been played, and the mountains of confetti have been cleaned up.  So, now what?  If you’re like most people, this is a time of great anticipation for what this new year may bring, and a much needed fresh start to try and do things better in the coming 365 days.  Here are 10 quick tips to help ensure that this year is your most profitable (and enjoyable) one ever!

1.) Set Ambitious Goals (But Not Too Ambitious) – Most people make two mistakes when setting their goals for the New Year.  The first mistake is being so concerned with making the goal achievable that they set it far too low, and don’t push themselves past the status quo of the previous few years.  The second (and most common) mistake, is to make “pie-in-the-sky” goals that are so far removed from reality, that they don’t really move the needle in terms of providing motivation throughout the year.  Saying you want to become a billionaire this year is nice, but you might want to start with a million first, and work your way up.  The most effective goals are just enough beyond your current reach that they make you strive for something better, but not so unattainable that they prove discouraging.

2.) Write Your Goals Down – This is the most over-given-and-least-followed piece of advice in the history of mankind.  If you haven’t heard the overwhelming statistics in 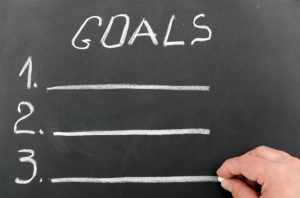 regards to the importance of writing down goals, I don’t know which rock you’ve been hiding under, but here’s one of the most compelling.  In 1979, Harvard MBA’s were asked if they had clear, written goals for their future.  84% had no goals, 13% had established goals, and 3% had established, WRITTEN goals.  10 years later, the same graduates were polled in regards to their income, and the 3% with written goals had made TEN TIMES more money than the other 97% COMBINED.  Enough said.

3.) Market Consistently – It’s always comical when real estate investors tell me how hard it is to find deals.  I always ask the follow-up question, “Well, what kind of consistent marketing have you been doing?”, which is always received with blank stares, and some stuttering, “Well, I, ummm, uhhhh..I look at the MLS every day.  To be successful as a real estate investor, or chiropractor, or landscaper, or ANYTHING…you have to be in constant marketing and promotion mode.  Sometimes that’s in the form of traditional advertising like newspapers, radio, etc…but it also includes networking with potential lead sources, or others in your industry.

4.) Think Positively – I know this sounds a little cheesy, but the way we think about ourselves is extremely critical to our success.  Henry Ford once said, “Whether you think you can, or think you can’t, you’re right.”  A recent study of insurance salesmen showed that optimists in the group outsold the pessimists by 88%, and pessimists were 3 times more likely to quit their job (probably because they were making 88% less money).  Other studies show that optimistic people live up to 9 years longer than pessimists, a

nd overcome illness much easier.  So, the benefits of being a glass-half-full-kind-of-guy or gal seem to be pretty obvious…don’t you think?

5.) Stay Away from Negative People – Nothing kills a positive attitude like hanging around a bunch of negative people and naysayers.  People who aren’t successful feel like it’s their purpose in life to make sure that no one else ever experiences success either.  These people come in the form of co-workers, friends, and unfortunately, family.  You can’t choose your family, but you can definitely limit the amount of time you spend with them.  Also, make sure you NEVER share your goals or dreams with these “Negative Nancy’s”, as they will do everything in their power to discourage you from doing something great with your life.

I’ll be back in a couple days with keys #6-10…but until then, I’d love to hear some of your advice for succeeding in the New Year.  Let us know in the comments section below!