Are REOs ready for a comeback?

A new report from Clear Capital suggests that REOs and short sales may be on the rise again.

“With stocks plummeting last week and the global economic impact on our domestic economy and housing markets still unknown, distressed sales continue to be a critical market indicator,” the report says. “Just like in the fashion industry’s iconic September issue, learn to be a trendsetter—from stateside to Puerto Rico—by letting distressed market measures give you full perspective of the market.”

“Distressed saturation continues to be a challenge we face in today’s housing market,” says Alex Villacorta, vice president of research and analytics at Clear Capital. “In fact, today’s ‘traditional’ housing market continues to be defined by distressed saturation levels. In Act One, at the start of the downturn, distressed properties were an albatross around housing’s neck. In Act Two, between 2011 and 2013, investors stepped in, buying, rehabbing and selling or renting distressed properties, which gave way to higher demand and rising prices.

“While the overall effect of higher rates of distressed saturation in Act Three of the recovery is unknown, one thing is clear; when it comes to housing, REOs and short sales are not a passing fad,” Villacorta said.

For the past three years, distressed saturation in the San Juan MSA has been steadily increasing, having grown eight percentage points, from a reading of 9% in 2013 to 17% today. This trend is unusual in the current housing environment. Over the same three year period, nearly all of the major metro markets have experienced steady declines in distressed saturation. In terms of pricing, this near doubling of the saturation rate has corresponded with a rapid change in price declines from a yearly loss of 1.5% in 2013 to a yearly rate of decline of 10.2% today. 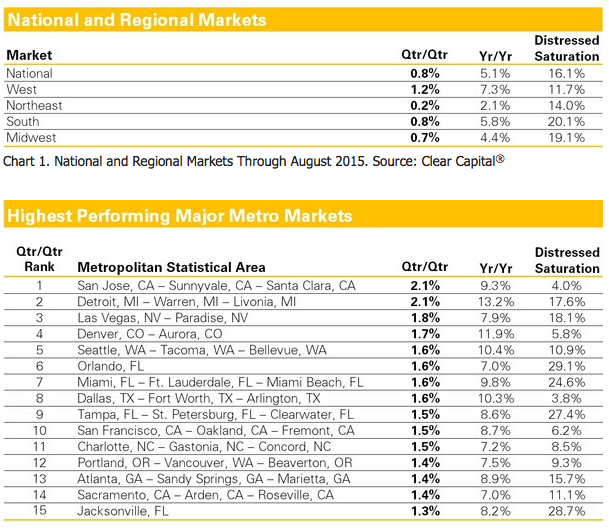 The Midwest is the only region to see quarterly gains in price appreciation, nearly doubling from 0.4% to 0.7%. The region still lags behind the West, which experienced declining gains of 0.1 percentage points, yet still continues to report highest quarterly growth at 1.2%. The South and Northeast appreciation rates remained stagnant, reporting 0.8% and 0.2% growth over the quarter. (Chart 1)

Regional performance is echoed at the MSA-level. The San Jose, CA and Detroit, MI MSAs both report healthy growth rates of 2.1%.

While the South did not see accelerated price gains, continued growth through August could be a sign that this region is on firm footing moving forward. Seven of the 15 top performing markets are located in the South, while four of the lowest performing MSAs are in the Northeast.

Villacorta said that last week’s crash leaves the economy and housing tenuous at best, especially as we move from the promise of the summer buying season. The last third of the year will reveal whether the housing recovery can withstand broader global volatility.

“If investors pull out, oversupply of distressed inventory could bring us back to Act One,” he said. “Or, a renewed source of distressed inventory could revive demand from investors and traditional homebuyers, alike, in an inventory-starved market. The driving factor will be whether traditional consumers will be willing, and more importantly, be able to participate. As the global and domestic economic outlook unravels, we will continue reporting on its effect on housing.”

Is It Legal for Real Estate Investors to Pay Referral Fees?