Some 1.2 million borrowers regained equity in 2014, bringing the total number of mortgaged residential properties with equity at the end of Q4 2014 to approximately 44.5 million or 89% of all mortgaged properties, according to CoreLogic (CLGX).

Nationwide, borrower equity increased year over year by $656 billion in 4Q14. The CoreLogic analysis also indicates approximately 172,000 U.S. homes slipped into negative equity in the fourth quarter of 2014 from the third quarter 2014, increasing the total number of mortgaged residential properties with negative equity to 5.4 million, or 10.8% of all mortgaged properties.

“The share of homeowners that had negative equity increased slightly in the fourth quarter of 2014, reflecting the typical weakness in home values during the final quarter of the year,” said Frank Nothaft, chief economist for CoreLogic. “Our CoreLogic HPI dipped 0.7% from September to December, and the % of owners ‘underwater’ increased to 10.8%. However, from December-to-December, the CoreLogic index was up 4.8%, and the negative equity share fell by 2.6 percentage points.”

Negative equity, often referred to as “underwater” or “upside down,” means that borrowers owe more on their mortgages than their homes are worth. Negative equity can occur because of a decline in value, an increase in mortgage debt or a combination of both.

On a year-over-year basis, however, the value of negative equity declined overall from $403 billion in Q4 2013, representing a decrease of 13.4% in 12 months. 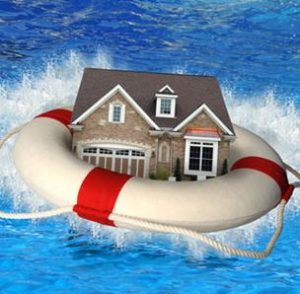 Of the 49.9 million residential properties with a mortgage, approximately 10 million, or 20%, have less than 20% equity (referred to as “under-equitied”) and 1.4 million of those have less than 5-percent equity (referred to as near-negative equity). Borrowers who are “under-equitied” may have a more difficult time refinancing their existing homes or obtaining new financing to sell and buy another home due to underwriting constraints. Borrowers with near-negative equity are considered at risk of moving into negative equity if home prices fall. In contrast, if home prices rose by as little as 5%, an additional 1 million homeowners now in negative equity would regain equity.

“Negative equity continued to be a serious issue for the housing market and the U.S. economy at the end of 2014 with 5.4 million homeowners still ‘underwater’,” said Anand Nallathambi, president and CEO of CoreLogic. “We expect the situation to improve over the course of 2015. We project that the CoreLogic Home Price Index will rise 5% in 2015, which will lift about 1 million homeowners out of negative equity.”

Here are some highlights:

A Picture is Worth a Thousand…..Dollars?