Consumers will be able to calculate mortgage payments within Google searches.

Lenders who were unhappy with the Consumer Financial Protection Bureau’s new mortgage payment calculator will soon have a new target for their ire, Google (GOOG).

We also captured a screenshot of the tool in action: 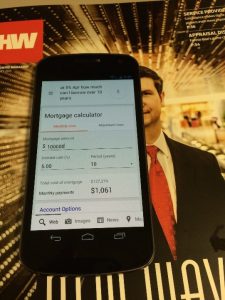 “Preparing for homeownership just got a bit easier,” Google’s post states. “Starting today you can ask Google things like ‘How much can I borrow at $200 a month?’ or ‘At 5% APR how much can I borrow over 10 years?’ You can even adjust the mortgage amount, interest rate, mortgage period and more to see which financial options fit your needs?”

Google’s foray into the land of mortgage calculation comes on the heels of the controversial “borrower education tool” from the CFPB. As part of the “Owning a Home” consumer tool, the CFPB included “Rate Checker,” which it touted as a tool to help consumers understand what interest rates may be available to them by using the same underwriting variables that lenders use on their internal rate sheets.

“In other words, we are giving consumers direct access to the same type of information that the lenders themselves have,” CFPB Director Richard Cordray said at the time.

The CFPB’s tool was met with angst from mortgage lenders, including the Mortgage Bankers Association. The MBA suggested the Rate Checker mentions rates and costs without including disclosure items TILA_RESPA rules and the CFPB mandate for borrowers – annual percentage rate, closing fees, etc.

Essentially, mortgage bankers said that if the Rate Checker were a lender advertisement or mortgage calculator, it would violate the CFPB’s disclosure rules.

“It sets borrowers up for severe disappointment,” David Stevens, president and CEO of the Mortgage Bankers Association, told HousingWire. “It should be taken down.”

Stevens says that the tool doesn’t inform borrowers of a host of other costs that lenders are required to disclose under TILA-RESPA, such as closing costs, APR, and other charges and fees, Stevens added.

“This tool has none of that. It gives borrowers none of that,” Stevens said. “It could allow lenders to rate bait the market.”

The CFPB’s response, in a note to HousingWire, appeared unequivocal. The Rate Checker is not coming down.

“The Rate Checker is an educational tool, and part of a larger suite of tools to help consumers be more informed and effective mortgage shoppers. The Rate Checker does not connect consumers with lenders,” a spokesperson for CFPB told HousingWire.

By Ben Lane Reprinted from Housingwire