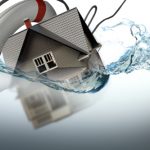 The nation’s negative equity rate dipped closer to single digits in the year’s second quarter, though nearly one in five borrowers remain poorly positioned, according to new data released Thursday.

Property information firm CoreLogic reported that nearly 946,000 homes returned to positive equity in the second quarter, meaning the mortgage holders owe less on their loan than the property’s worth. With the most recent quarterly increase, CoreLogic estimates the total number of mortgaged homes with equity across the country has surpassed 44 million.

“Borrower equity is important because home equity constitutes borrowers’ largest investment segment and, as a result, is driving forward the rise in wealth for the typical homeowner,” Khater said.

The national aggregate value of all homes in negative equity status was $345.1 billion at the end of the quarter.

While the overall rise in equity marks another positive step forward for the housing market, it’s undercut by the fact that nearly 9 million homes are “under-equitied,” meaning the properties have less than 20 percent equity. Out of that group, 1.3 million have less than 5 percent equity, putting them just barely above water.

With so little equity, CoreLogic explained under-equitied or near-negative borrowers may have a more difficult time refinancing their homes or obtaining the financing to sell and buy a new one.

Even worse, those borrowers with near-negative equity remain at risk of going back under if home prices fall even slightly.

At the same time, the bulk of positive equity is concentrated at the higher end of the housing market, leaving lower-priced homeowners—who need to trade up in order to open space for first-time buyers seeking affordable houses—still struggling.

Out of all 50 states, Nevada had the highest percentage of underwater properties in Q2, posting a negative equity rate of 26.3 percent. Following that were Florida (24.3 percent), Arizona (19.0 percent), Illinois (15.4 percent), and Rhode Island (14.8 percent). Together, those top five states account for nearly one-third of negative equity in the United States.

On the other end of the scale, Texas boasted the highest percentage of homes in a positive equity position, with 97.3 percent of properties above water. Alaska followed at 96.5 percent, with Montana (96.4 percent), North Dakota (96.0 percent), and Hawaii (96.0 percent) rounding out the top five.

Motivated Seller Gold Mine- Targeting Niches for a Higher R.O.I.

The Five Stages of Foreclosure Grieving